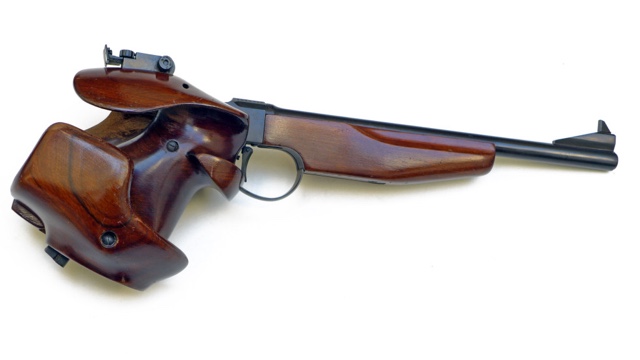 The most difficult of all the Olympic/ISSF (International Shooting Sports Federation) pistol sports is 50 Meter Pistol. This is a sport in which a shooter holds a pistol with one hand and fires 60 shots over the course of two hours at a target with a 5cm (2") 10-ring, 50 meters away. Unlike NRA-style bullseye matches, in finals rounds the 10-ring is further divided into zones, so a bullet striking the 10-ring may be scored anywhere from 10.0 to 10.9.  50 Meter Pistol is also known as Free Pistol, as there are very few rules regarding the pistol itself. It has to fire a .22LR cartridge, no optical sights are allowed, the grip can't extend over the wrist, it must be held and fired by one hand, and that's pretty much it.

I have admired the elegance and the simplicity of free pistols since I first saw a picture of a 1950s Hammerli when I was a child. I have long wanted one, but they typically cost $1,600-2,000 or more. A bit much for a sport that I'm not really going to actively compete in. But then not long ago I discovered a less expensive route.

In 1962 the Soviets introduced the TOZ-35m to international competition. The gun owed an obvious debt to earlier Hammerli designs, but included some novel features of its own, including an amazingly adjustable trigger. Like many Soviet made industrial products it was crude externally, but refined in the details where it mattered. It quickly became a world-class competitor, and despite not having been made in over a decade, it still shows up in international competition.

As I noted, there haven't been any new TOZ35m pistols made in a long time, but they still keep showing up in the marketplace as old stores of them are discovered by enterprising Russian exporters. I recently saw a few showing up again at specialist dealers in ready to compete condition for around $1,300. I also saw them popping up in used ("fair" to "excellent") condition at prices ranging from $475 to $575 at various online dealers. I asked knowledgable people at an online forum for ISSF/Olympic shooters if this was a good deal, and the consensus was that I should jump on it while they were available. I asked my local FFL if he could get one, and he found me an excellent, unused one for $585 out the door. The toy account was flush, thanks to some recent sales, and I told him to go ahead and get me one. Of course when you pay less than half of what the specialist dealers are charging, there's a bit of a catch... 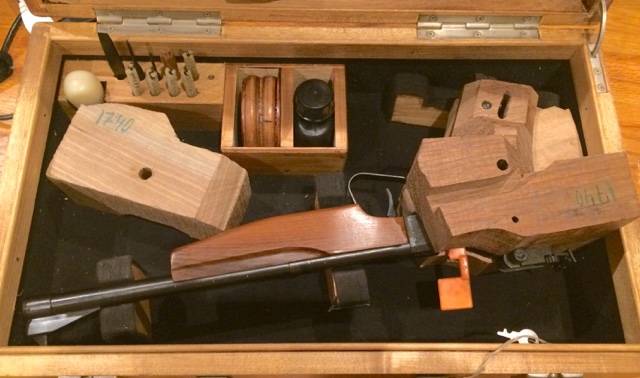 Above is the gun as I received it. You will note the handy carrying case full of accessories, and you will probably also note that the grips as supplied are a bit, um, blocker than the one n the gun at the top of this post. There's a reason for that. There were no standard sized grips available for the TOZ. Fit is more critical in 50 meter pistol than in any other shooting sort, and shooters in the USSR were supposed to work with their coaches to make a customized grip that would fit them like a glove. I've done some carving and refining stock blanks beginning in the 1990s, when I customized my Field Target air rifles, but never anything quite this complete. Before, I've usually started with rasps and files. This time I think I'll have to start with a bandsaw, or possibly an axe.

Posted by michael edelman at 3:58 PM