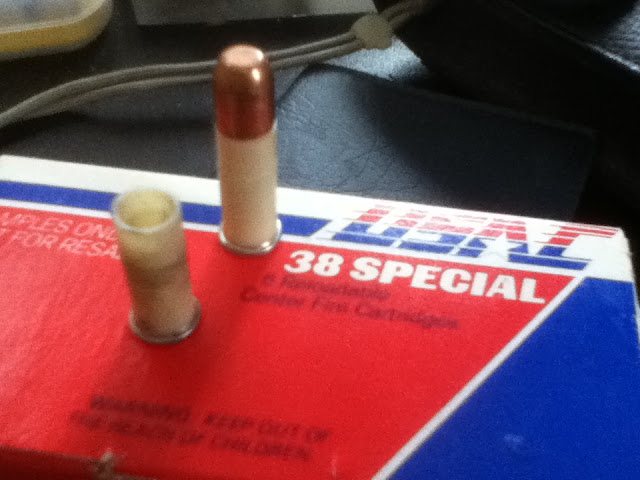 While cleaning up in my basement the other day I came across this box of odd .38 Special ammunition. It contained six cartridges, two of them fired, that I received as a sample from my favorite fishing and hunting shop in 1984. Unless you're a collector of ammunition you've probably never seen these before. They were introduced to the market and disappeared in less than a year.

Back in 1984 a company called USAC (not to be confused with the former Indy Cars sanctioning organization) came out with another of those brilliant solutions for which there was no existing problem- in this case, a highly simplified reloading system. In principle, it sounded impressive. Reusable plastic cartridge cases with snap-in bullets that used standard primers and powders, and a simple, inexpensive reloading press you could hold in the palm of your hand. No sizing or priming was required, so all the press had to do was deprime, seat a new primer, and snap the bullet in place.

In theory this was a great idea. In practice, it had a few problems. For one, it was very inflexible. There were four "full metal jacket" bullets offered ranging from 148 to 158gr which were in fact just copper flashed lead. No hollow points, no real jackets. Because of the snap-in feature, the rear half of the bullet didn't engage the rifling, so they had to be fairly long.  USAC only recommended a very few powders and loads. 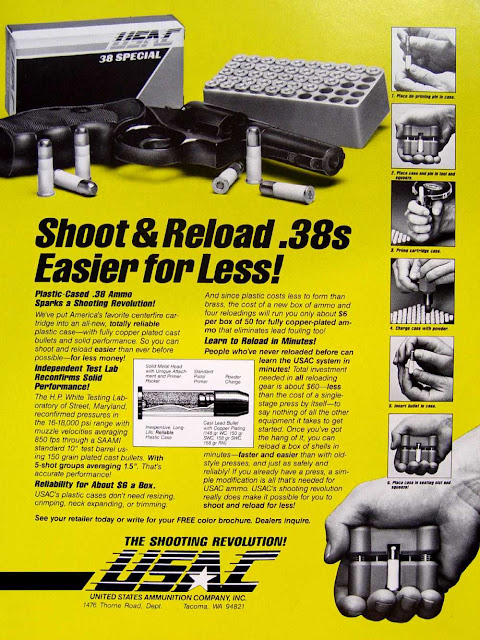 Shooters reload for one of several reasons: To save money, for better accuracy, to get loads not commercially available, or just for the pleasure of developing new loads and experimenting. The USAC system was aimed at the shooter who wanted to save money. Problem was, you didn't really save enough to make it worth while. A box of standard 158gr .30s had a retail cost of around $9 in 1984, and commercial reloads cost half as much A box of USAC .38s cost $11, and replacement bullets were $3.30-3.50 per 50. USAC ads say that the reloader could get started for around $60.

Ideally, using the USAC system a reloader could turn out a box of cartridges for around $4. Buying new cases would push that up a bit. Using traditionally reloading methods and cast bullets a box of 50 would have cost no more than $2.50. It was unclear how many reloads you could get out of the plastic USAC cases. Brass, if loaded to modest levels, can be used dozens of times.

In the end, the economics of the USAC system just weren't attractive enough to interest shooters, and the limited options didn't interest reloaders.  USAC went bankrupt, and the ammunition and components were sold off. If you come across a box of these, they make a nice addition to a collection. They're not rare enough to be valuable, but they are interesting.
Posted by michael edelman at 9:06 AM 2 comments: 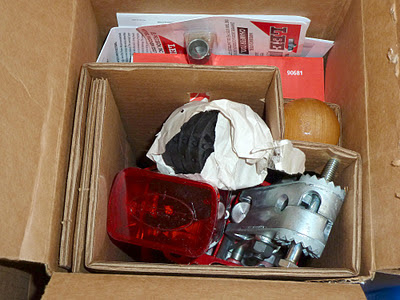 After a few trips to the range with my new Ruger Blackhawk it slowly dawned on me that if I was going to shoot this thing regularly I'd better start reloading again. White box Winchester .38 specials were running $17-18 for a box of 50, and .357s were pushing $30. More importantly, I couldn't buy the loads I wanted. Everything at the local stores was so-called "target" loads that were like the old police standard 158gr RN, or 125gr semi-jacketed magnums.

When I started reloading for my two Dan Wessons back in the 80s my impulse was to see how hot a load I could safely shoot. That meant jacketed bullets over a max charge of Allient 2400, producing screaming velocities, massive muzzle energy, and a tongue of flame two or three feet long. But gradually it occurred to me that I wasn't likely to be facing grizzly bears at the range, and it made more sense, and was a lot more fun to shoot low-powered .38 special and .44 special wadcutter loads.

These light loads- what my PPC-shooting pal Ric calls "bunny fart" loads- are a not only more enjoyable to shoot, and a lot more accurate, they're also lot more practical for a lot of hunting uses, too. Sure, if you're hunting deer with a revolver it makes  sense to use a .357 or .44mag, but low power .38 special loads are perfect for a wide range of small game. A 148gr wadcutter over 2.7 grains of Bullseye yields around 670-700 fps, depending on your barrel, and around 140 foot-pounds of energy. That's about the same as a hot .22LR in a rifle barrel, or an old .36 percussion revolver. The heavier, slow moving bullets are very effective, and do a lot less meat damage than the high-speed HP .22s.

At any rate, having decided to get back into reloading, I started out by digging into some boxes packed away many years ago and retrieving a .38SPL Lee Loader, Lee primer seater,  cans of Bullseye and Unique, and a few hundred primers. I ordered a box of 148gr wadcutters and a week later set to work loading cartridges. Now using a Lee Loader is the simplest and most fool-proof way of reloading cartridges that here is. It's also the slowest. It's fine for rifle reloading, where you might only need 20 cartridges for a season of deer hunting, and I'm told some benchrest shooters swear by them,  but pistol shooters tend to burn up ammunition at a much faster rate.

After loading two boxes worth I realized that if I wanted to keep shooting I'd better upgrade by reloading gear, starting with a proper press. A number of friends who shoot .45acp and 9mm in competition like the Dillon progressive presses, which will run you about $370 for their basic Square Deal press. I wasn't going to be loading the same kind of volume they were, and I'd started with a Lee turret press, and liked it, so I went ahead and ordered a Lee Turret Press and a set of .38 special carbide dies (which can also be used for .357 mag) from Factory Sales, an outfit that supplies Lee products mail order at a healthy discount.

For $150 I got the Deluxe Pistol Kit, which includes a press, powder scale, auto powder measure, primer pocket cleaner and case trimmer. Another $33 and change bought a deluxe carbide 4 die set for a total outlay of around $183.  (That's the box from FS in the photo above.) I ordered 500 hard cast 148gr wadcutters and a similar number of 158gr SWCs from from Dardas Cast Bullets. I've got a fair supply of powders, including some left over from my earlier reloading, and some powders like Unique and 2400 that I've been using for shotgun reloading, and enough small pistol primers to get started. The only remaining step is to set up my reloading bench... and that's where I started to run into a few roadblocks.

My basement, which used to be a very well organized workspace, became a random storage area during a remodeling project a few years ago, and it's remained that way. This seemed like the perfect reason to clean it up, reorganize, and make room for a number of projects. I started to move sotrage boxes away from wall, and discovered a lot of blistering paint and effervescence. Hmm. I should scrape and paint that. Maybe do some patching with a little hydraulic cement, too. I need room to work, so I've been boxing old books, tossing bits of metal in the recycling bin, putting unused hobby and sports gear on eBay, and in general doing everything but reloading. But with luck, I hope to be turning out custom loads in time for when the snow melts at the outdoor range next spring ;-)
Posted by michael edelman at 9:46 AM No comments: